In Korean Philately (Nov. 2012 Vol. 54 #4 / Feb. 2013 Vol. 55 #1) Mr. Lyman Hale showed several types of postage due slips used by the Korean postal services, asking for anything new which could be added to his information. While living in Korea in 2013 I wanted to do an experiment with postage due (Korean: 우표 인한) in mind: what would happen if I were to send an envelope without (enough) postage on it?

Yes, technically I was defrauding the postal services, but let’s forget about that for a moment, and focus on the question. I, like Mr. Hale, had also noticed that there are no postage due stamps of (South) Korea, and that they never existed either. Therefore, some other kind of system had to be in place. What I did was this: I used two addresses which would both mean the mail would either way come back to me. On the front I wrote my private address in Seoul, on the back my work address in Suwon. I then put a stamp-like sticker on the envelope and posted it next to our office in Mangpo/망포 (in eastern Suwon). And then I waited.

Two days later, when I entered the office, my envelope was waiting for me. It had apparently been returned because of insufficient postage on the envelope. The envelope came with a slip which looks very much “homemade”, created by the Eastern Suwon Post Office (동수원우체국) to notify a customer through a “mail bounce notice” (우편물반송안내문). The slip can be used for four different situations in which the mail will be returned, such as insufficient postage put on the envelope. In this particular case it was the second reason: “우표미부착” or “stamp not attached”, which was true given that the sticker had zero value. Therefore, the Suwon Post Office is asking me (very politely by the way, look at the Korean honorifics used) if I could resend the envelope after putting on 360 won worth of stamps. Which I never did, or else I couldn’t be showing this slip…

Mr. Hale also asked about one of his examples (figure 6) whether “the sender actually (did) think a TB seal would get the letter sent?” I am not too sure about such seals, but here is an example showing how revenue stamps (수입인지, nr. RP74 in KSSC 2003) were indeed used to successfully send a letter to someone. Apparently the letter rate in 1989 (the date mark is 89.9.25) was 80 won, so this person probably got away with it by putting on “stamps” for 100 won. To the best of my knowledge even though some countries had stamps which could be used both as postage and for revenue purposes Korean revenue stamps were never valid in Korea for postal use, so this was a lucky shot. 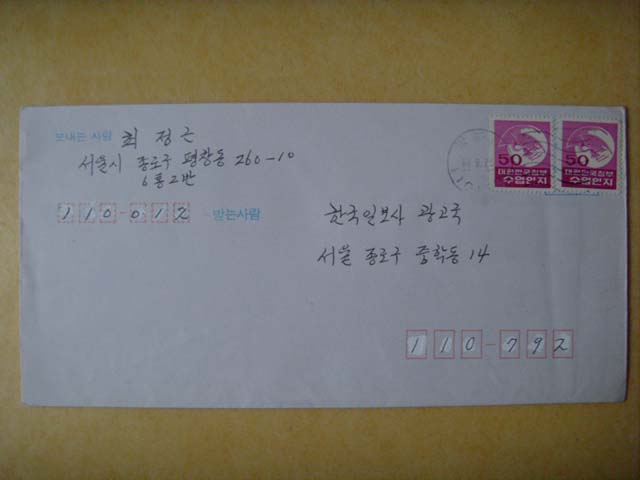 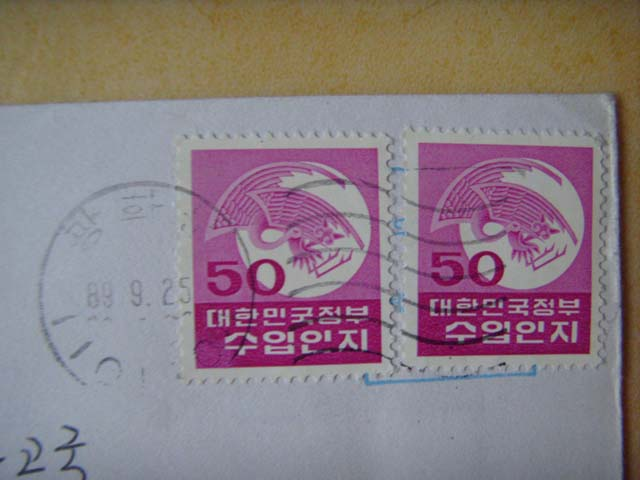 (No copyright infringement intended, but unfortunately I lost the link to the original Korean blog showing these two pictures. If I find the website again I will of course include the proper links.)

(This article was originally published on www.spanjersberg.net.) 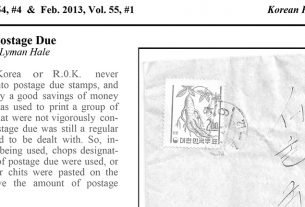