(Text originally published in MSS Quarterly Bulletin Nr. 314.) Shown here are two Republic of Korea (South Korea) Post Office meter stamps from 2005 with pictorial propaganda slogans. The top slogan is a map of the Sea of Japan (or East Sea as the Koreans call it) with a circle around the Dokdo Islands in the center. Dokdo is virtually the same distance (140 miles) from the mainlands of South Korea and Japan. The lower slogan is a close-up map with an inset showing the distance between Dokdo and the nearest uncontested South Korean territory which is the island of Ulleuingdo (50 miles distant) and the nearest Japanese land, the Oki islands (115 miles distant).

“Dokdo is our island” is the message in the slogans. The islands, internationally known as the Liancourt Rocks and currently effectively controlled by South Korea, are contested by Japan. The contest, fortunately, is conducted through the medium of international law rather than force of arms. Once in a while this battle flares up, as happened around 2005, prompting Korea Post to create the two slogans which back the claim of South Korea over the islands. The dispute continues with no resolution in sight. Just to make it interesting, North Korea also claims sovereignty.

This 1998 South Korean slogan celebrates the inauguration of legal visits by South Koreans to North Korea. Visits were limited to the scenic area of Mount Kumgang, and the only entry available was via the pictured cruise ship which, tellingly, appears to be listing to its side and about to sink.

In 2008 a South Korean woman tourist wandered off and was shot and killed by North Korean soldiers when she entered a forbidden zone. In response to the incident South Korea suspended all visits to Kumgang thereby shutting down one of North Korea’s few accesses to foreign currency income. Upset, the North Korean government threatened “extraordinary measures” if South Korea did not lift the ban and in fact did take such measures when it seized five South Korean owned properties in Kumgang. The ban was not lifted. South Koreans no longer have regular access to the North, and the North continues to suffer a lack of foreign income. 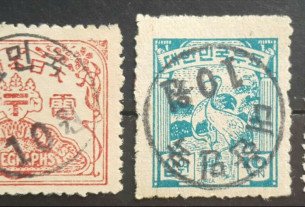 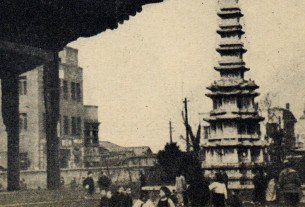 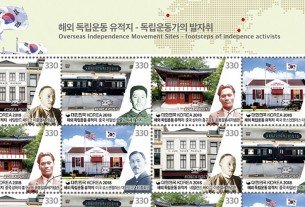 The story of the independent independence activists