(Originally from KP double number November 2012 / February 2013, Vol. 54 Nr. 4 / Vol. 55 Nr. 1) I did some searching in the web and ran across the KSS, the ROK philately club in the US. I had an inquiry that is detailed below and would appreciate any comments if you can find the time.

Although my main interests are German and Swiss philately (I am a member of those societies), I became quite curious about an item I found yesterday at a local stamp bourse (Figure 1). It is dated 46.2.1 (February 1, 1946).

I did find a somewhat detailed discussion about a similar item at the end of a web reference on imperial Japan. It was under http://members.jcom.home.ne.jp/yosha/yr/empires/Detritus_stamps.html

Is this a very common item? It contains only 4 of the 6 initial stamps of ROK. Follow-ing the lengthy occupation by Japan (since WWI), occupation stamps were overprinted with new values and several Korean ideographic symbols. My understanding is that, soon afterwards, ROK started the process of switching to a phonetic alphabet. I presume that they spoke only one language.

(Ed. Of course, the Japanese occupied Korea long before WWI – at least since 1905.) 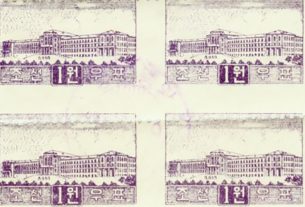 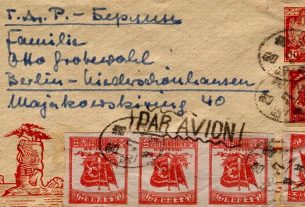