In the past Andrew Crenshaw contacted the KSS regarding military covers from ROK soldiers sent from Vietnam during the Vietnam war. One example of these covers is shown here. It is a cover sent from Vietnam to Seoul, but something went wrong.

Military mail was often free. It seemed this was also the case with this envelope originally: the purple/red handstamp stating 파월귀국자우편 suggests this. This term falls apart as:

However, for some reason the postal services decided that the service was not “for free” and therefore the letter was not adequately paid for. This is where the cancellation with the “501” comes in. Some field post office (“군우”), nr. 501, decided that 14 won had to be paid. But since this couldn’t be paid by the soldier (the envelope was already on its way) the receiver had to pay for this.

That is were the postage due slip comes in. It is stuck upside down on the envelope, but it clearly shows 14 won postage due had to be paid for the envelope. We know who had to pay: 전영진 (Jeon Yeong-jin), living in Hwagok-dong which was then still part of Yeongdeungpo-gu, on the south side of the river but inside the city of Seoul.

And that is what can be deduced at this time from this envelope.

Andrew Crenshaw’s original posting can be found on his blog. For more information please see Lyman Hale’s articles on postage due in South Korea and in-country Korean military mail. 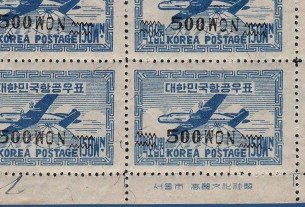 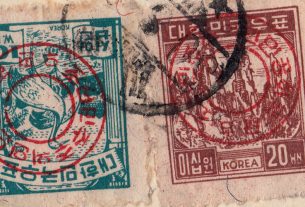