Kiku Shimbun 169 (August 2016) featured an article about the use of Japanese Showa stamps in South Korea after late 1945. The article is reprinted here by permission. It was based on a translation of text from the ‘Specialised Catalogue of Showa Stamps’ by BSJP member Nicholas Pertwee.

On the 7th September 1945 the United States Far East Military Command announced that there would be a military administration for Korea and with effect from the 11th September the United States Army Military Government in Korea (USAMGIK) assumed direct control. But because this Office had neither the experience nor the ability to rule Korea they employed Japanese or pro-Japanese Koreans so that the practical effect was that the rule of the Korean Government General continued unchanged.

The postcard, illustrated below in Figure 5, is dated 24 March 1947 from Chuncheongnamdo, Yesan and has the 2 Sen Nogi added to the 3 Sen Kusunoki postcard, to which the South Korea 20 Chon Liberation commemorative has been further added to make up the 25 Sen postcard rate. The 5 Sen postcard was valid at the time and so this represents a rare example of a Japanese stamp validly used after their sale had ceased.

1 Sen = 1 chon, 1 Yen = 1 Won = 100 chon. The Japanese Yen and Sen monetary units continued in use. Banknotes in circulation in liberated Korea were pre-war Bank of Korea notes. The Korea Book Printing Company that printed school textbooks in the Government General period also printed Bank of Korea notes after the war under the same name and with the same design; these were put into circulation, while use of the old notes was prohibited. 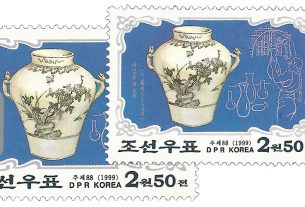 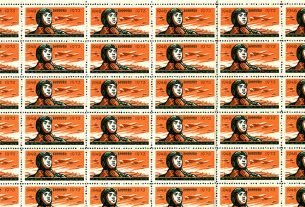