(From Korean Philately February 1998, pages 5-6; full title “Assistance Requested for Monograph on Local/Municipal Revenue Stamps of Korea”) The Board of the Korea Stamp Society met during the recent PACIFIC 97 in San Francisco. During that meeting a tentative schedule of Monographs and special publications was announced. Of interest to revenue collectors of Korea were Blanchard Miller’s Korean Revenue Catalog, 1998, and Bill Collyer’s Local Korean Revenues, 2000. “Korea: The Municipals,” featuring Bill Collyer’s local Korean revenue stamps, was illustrated in an article by G. M. Abrams in The American Revenuer, November and December, 1980.

Since 1980 there has been a new series of local revenue stamps from Korea; and of course new discoveries of older stamps that have been identified as local revenue issues of the Koreas. This is a call for your assistance in presenting a Monograph on Local Korean Revenue Issues. Some of you may have no interest in the Local Revenue Stamps of Korea but may have a stamp or two in your collection that fits into this category. Others of you may have a significant holding of local revenue stamps of Korea but no method to identify them.

Now during the next three years there is an opportunity to help with the identification and classification of these revenue stamps. Your comments are requested on what should be included in this Monograph and a definition of what to include:

A listing of any articles (illustrated or not) of the “local” revenue stamps of Korea will be appreciated, along with a photocopy of the article.

So, if you can contribute… Your Comments, Your Photocopies or if You want to be a Co-Author, write to me at the address below:
William M. Collyer
President Korea Stamp Society

Postscript (2018): allthough several others did publish about Korean revenue stamps after 1998, the proposed KSS monographs were never published. 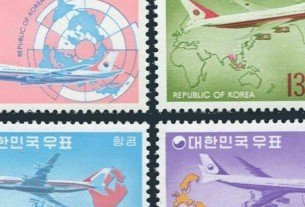 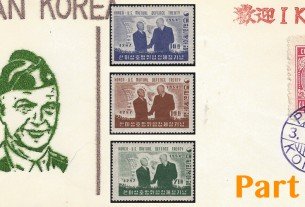 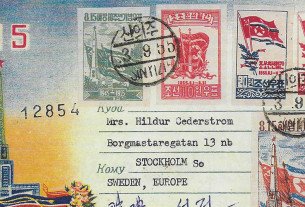 Imagine my surprise when the DPRK also printed a postal stationery catalogue!