The KSS has a long tradition of answering reader questions. Members (and also non-members) have in the past asked about unknown stamps, variations, perforations, dates of publication, etc. Examples of such questions can be found on the KSS website as well. Here is a question from Al Sedita regarding Korean revenue stamps.

Al Sedita writes:
I have been collecting for only about 2 years and still have a lot to learn. Would like to find out how rare they are and approximate value. Also I have from the same collection I purchased many stamps from other countries they visited and most are in multiple blocks like these revenues. More than a block of 4 seems like would be very rare. Does that increase the value and should I not separate them?

Ivo Spanjersberg answers:
Since approx. 2014 I have been collecting Korean revenue stamps, just a few years longer than you. I have good and bad news regarding these stamps. The bad news is: they are worth almost nothing. Somehow a lot of these stamps, first issued in March 1948 in a series of 7 values, came onto the stamp market at one time or another. Amongst all the South Korean revenue stamps they are probably the most commonly available on websites like Ebay.

It seems quite a few complete sheets were cut up and you can find multiples from this series sometimes on for instance Ebay. I have seen one complete sheet of 100 stamps of the 1 won value offered on Ebay, going for 70 dollars in 2015. A sheet of 50 stamps of the 2 won value sold at 51 dollars that same year. As you can see: not very high market values. The most valuable stamp shown in the scan are the blue 5000 won stamps, they list for 20.000 won in the KPSC. But KPSC prices are, like most catalogue prices, too high compared to prices actually paid on the market.

There is however also good news: since they are relatively cheap and easy to come by if you want to seriously study them this should be readily affordable. One way of studying them would be to try to “plate” them. (See the Wikipedia explanation for more information.)  I am sure there must be many variations of these stamps out there, but to the best of my knowledge no-one ever did a serious study into different plates and printings. If you want to do such a study then separating them is not a good idea as this would destroy information about the exact location of individual stamps.

A recent opportunity to examine full panes of these stamps has provided additional information regarding the issues and makes possible the following notes and comments.

The issues of 1946 in denominations of 1 weun (won) – orange, 5 weun – green, 10 weun – dark red, 50 weun- light red, and 100 weun – blue, were issued in panes of 100 stamps, 10×10. Paper is unwatermarked white to cream, wove, and the panes bear no imprint or plate numbers. The stamps were lithographed, and gumming was applied unevenly, apparently by brush, similar to the haphazard gumming of the Emancipation Commemorative postage stamps of 1946. Perforation is rough and of a gage which appears to be similar to that of the Emancipation Commemorative stamps.

The revenue issue of 1948 appears to be a most interesting series. Provided that sufficient stamps were available, this issue would afford a field day for the specialist. Shade varieties abound, some of a major nature, flaws of various degrees are to be found, and the designs of the stamps are considerably more pleasing in appearance than the postage stamps of the Third Regular Issue which were current at the same period.

The Korean designer of the 2, 3 and 5 won stamps experienced some difficulty with the English language inscription at the bottom right hand circle of these three stamps. The English abbreviation “Wn” was rendered as “Wri “, with the “0 ” backwards.

These stamps were all lithographed on the wavy line watermarked granite paper, the same as that used for printing of the Third Regular Postage issue. Two different pane formats were used for some and possibly all of the stamps. We have seen the following:

Most of the issue was gummed, but a distinctive printing of the 3W purple has been seen in panes of 100 in a very light shade of purple and issued without gum. In addition to this distinctive shade variety, there is a very striking shade of the 5W green, a very light shade, entirely different from the bulk of the printing noted in a darker yellowish green.

Korean revenue issues are a field unto themselves, closely paralleling the postal issues and worthy of more attention from the collector. If any reader of these notes can help to shed more light on the revenue issues, further information and assistance will help to form a clearer knowledge of the field of Korean revenues.

By the way, as a KSS member you can buy older issues of Korean Philately magazine. I bought this one (exactly because of this article), which is why I was able to re-publish it here.

But now the question is: what do you, the reader, think? Please leave your ideas in the comments below. 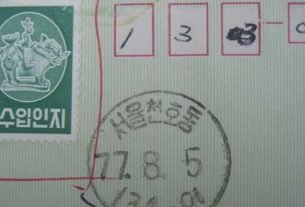 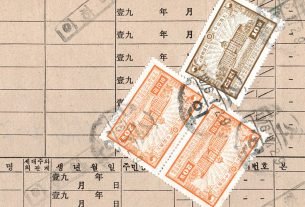 The Revenue Stamps of Seoul City (part 2 of 3)