(News from 우정사업본부 / KoreaPost) On 1 August 2018 KoreaPost released a new stamp with a value of 2130 won in the current regular issue series. The stamp shows a Korean jar made of white porcelain with a cobalt-blue pattern showing a dragon and clouds.

KoreaPost also released this English text with the stamp:

Due to the raised cost of national ordinary registered mail handling by 170 KRW from 1,630 KRW to 1,800 starting on August 1, 2018, Korea Post is publishing a new design for the 2,130 KRW stamp. The new stamp will feature the White Porcelain Jar with Dragon and Cloud Design in Underglaze Cobalt Blue, one of the blue and white porcelains that represent the dignity and beautiful art of the Joseon Dynastys royalty.

Joseon Dynasty blue and white porcelains are porcelain wares that have blue designs drawn onto a pure white base, one of the few royal aesthetic combinations of painting and handiwork. These wares first began in the Yuan Dynasty of China, and made its way into Joseon when the styles of Chinas Ming Dynasty were being brought in. The blue pigment in the blue and white porcelains are made from cobalt, which is a black-brown color in its mineral form, but transforms into a blue at high temperatures. Because cobalt was rare and expensive at the time, these blue and white porcelains were only used by the royal family. They were made by first making the plain porcelain at the special royal kiln in Gwangju, Gyeonggi-do, and then the artists from the best painting bureau of the time would decorate it. Designs usually included clouds and dragons, bamboo, plum blossoms, or any of the other Four Gracious Plants, reflecting the tastes of the royal family. Following into the end of Joseon, the common people started to gain power, and many more works were crated showing commoners culture.

The White Porcelain Jar with Dragon and Cloud Design in Underglaze Cobalt-Blue is a blue and white porcelain jar made in the late 18th century, and is currently displayed at the National Museum of Korea. It stands at a commanding height of 53.9cm, and it was used in royal family rituals to hold flowers as decoration, or as a container to hold alcohol. This blue and white porcelain has an exquisite, cobalt blue design drawn onto the clear white porcelain that leaves quite an impression. In the center of the jar, there is a large dragon depicted that seems to be moving dynamically through the clouds. Dragons were symbolic of the absolute authority and power of the king. The bottom of the jar is arranged with are designs including lotus flowers, and the mouth is wrapped with vine designs, that add an artistic finishing touch.

All relevant text and images in the page copyright: 우정사업본부 / KoreaPost 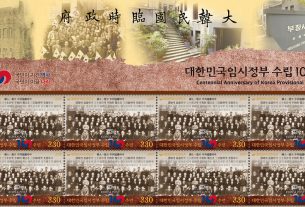 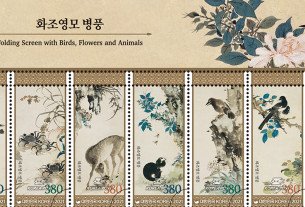 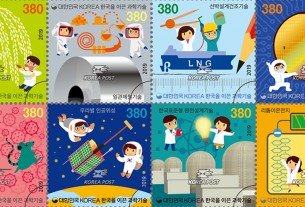