The end of the Korean War is already more than half a century in the past, and much of the philatelic activity engendered by that conflict has been extensively described and consolidated. A major aspect, however, has escaped attention until very recently. The Korean Stamp Catalogue, published by the Korean Stamp Corporation in Pyongyang, contains the first published report of stamps that were overprinted in 1951 with a chop of the Ministry of Posts and Telecommunications “instead of lost stamps in custody during the temporary retreat of the Fatherland Liberation War.” The simplest interpretation of this somewhat garbled account is that remaining stocks of current issues were overprinted with a validating chop to counteract the use of looted stamps that were in circulation. To understand the “temporary retreat” referred to, it is helpful to look briefly at the chronology of the war prior to that date.

After the Incheon landing, September 15, 1950, ROK troops crossed the 38th parallel on October 1, followed by UN (US) troops on October 7. Suan, Sariwon, Pyongyang were taken on October 16, 17, and 19, respectively, and the advance north continued until the Yalu was reached, in spots, around the 26th. However, with the entry of Chinese forces, the forward line started its retreat southwards from the 29th. With a bit of see-sawing, by November 27, it was back at Anju, and on December 4, Pyongyang was abandoned to Chinese troops. Within a week the bulk of the UN forces were again south of the 38th parallel, never to return north again. We know that, during this period, which lasted for not more than ten weeks, looting of post office material –mail items, postal stationery and stamps– occurred; it has appeared from time to time on the international market ever since. It would be surprising if some such material did not also fall into the hands of locals, and the necessity for counter-acting its use is very understandable. 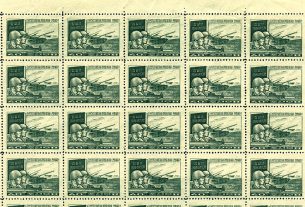