Recently when I bought some stamps from a Korean dealer through Ebay I received an envelope with some very recently issued commemoratives on it. This time the same seller went further and not only used the most recent stamps issued, but he actually created an FDC while doing so!

The stamps are from the independence movement commemorative sheet, numbered KPC3331-3334, which come in a 4×4 souvenir sheet.

Because space was needed for my address two stamps were taken from the sheet. This however meant that the cover would have been underpaid for 410 won, which is why the meter mark has a value of 410 won. This meter mark also doubles as registration label (see RR code) and airmail label (“Air Printed papers”). It also shows the date as 06.08.2018, which made me realize this envelope was sent on the actual first day of issuing!

And indeed, after closer inspection I noticed something about this envelope: a combination of cancellation types!

The contents of course were what I had paid for to begin with, but this was quite a nice bonus! 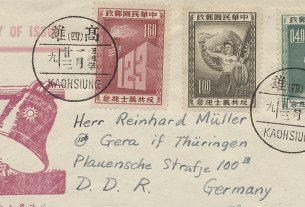 Return of Chinese prisoners of war (1954) 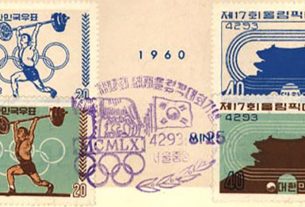 Korean FDC’s: “Trying to fill in the blanks”