(Originally from KP May 2012, Vol. 54, No. 2) Late last year (2010), North Korea an-nounced a drastic economic reform through the introduction of a new currency. While the name of the currency was not changed, the new currency was worth 100 times the old currency. In other words, devaluation of currency occurred, resulting in a value of 1/100th of the previous value.

It was followed, however, in a matter of a week or so by a report that the payroll amounts would not change, resulting in a pay cut in real value of 1/100th. A worker who had received a salary of 3,000 won would, thus, continue to receive 3,000 won, but it would now be worth only 30 won in old currency.

It was also confirmed that the exchange of old currency for new was not liberal, but controlled by a household quota. It was made clear, thus, that the main target of this drastic operation was intended to slash “closet banking caches” to nil.

The chaos started by this transaction caused severe inflation. It was reported recently that a manager of “National Economy Project,” Pak Nam-Gi, was shot to death.

Accompanying this happening, I suspected, first, that there would be a whole change of postal rates and fees, with major decreases by 1/100th, producing a rate of 30 jon for domestic letters and cards, which had previously been 30 won. This would have necessitated the overprinting of existing old stamps, simply because this all happened so suddenly, and there would be no time to prepare new stamps beforehand.

The answer is shown in Figures 10 and 11, reflecting a slight increase in real domestic rates, only domestically, I would presume, from 10 won to 3 won. Now I am trying to obtain more samples, materials, and information. 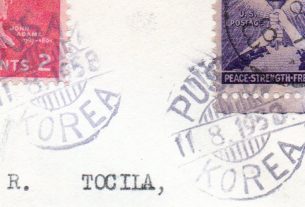