Home > News > New Releases DPRK > KSC5176D-5176E: The Grand Mass Gymnastics and Artistic Performance The Glorious Country in Celebration of the 70th Founding Anniversary of the DPRK

(News from 조선우표사 / Korea Stamp Corporation) Stamps were issued to show the grand mass gymnastics and artistic performance The Glorious Country in celebration of the 70th founding anniversary of the DPRK. The grand mass gymnastics and artistic performance impressively shows the immortal revolutionary exploits performed by President Kim Il Sung and General Kim Jong Il, which adorned the founding and course of development of the DPRK, and the glorious and brilliant history of Juche Korea which has brought about epoch-making changes and won victory after victory following the leadership of the Workers’ Party of Korea. 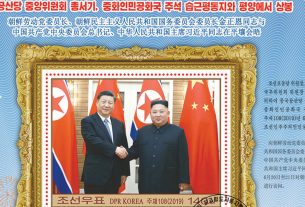 KSC5215L: Historic Summit Meeting in Pyongyang by the Supreme Leaders of the DPRK and China 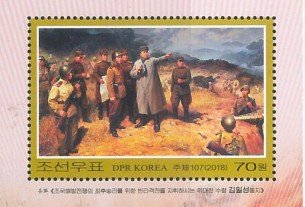 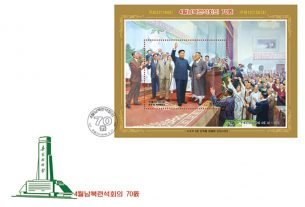 KSC5164: 70th Anniv. of April 1948 Joint Conference of the Representatives of Political Parties and Public Organizations in North and South Korea.