(News from 조선우표사 / Korea Stamp Corporation) On 16 October 2018 the 조선우표사 / Korea Stamp Corporation issued a stamp sheet commemorating the third round of north-south summit meeting. The release came with this text: “The third round of north-south summit meeting and talks took place at the House of Peace in the southern area of Panmunjom on April 27 Juche 107 (2018). The north-south summit talks, with a firm will to put an end to the protracted division and confrontation, outcome of the cold war era, as early as possible, to open a new era of national reconciliation, peace and prosperity with determination and to improve and develop inter-Korean relations more positively, adopted the Panmunjom Declaration for Peace, Prosperity and Reunification of the Korean Peninsula. The historic Panmunjom Declaration marks a fresh turning point in relinking the severed blood vessel of the nation and hastening the future of co-prosperity and independent reunification.”

The stamp sheet contains two stamps of 70 and 80 won plus a seal between these two stamps:

The FDC for the stamp sheet release: 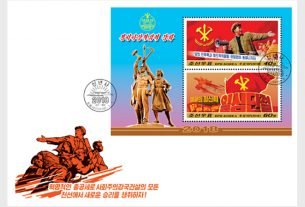 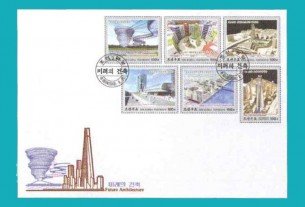 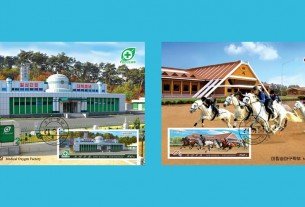