(News from 조선우표사 / Korea Stamp Corporation) Two stamps were issued in a stamp sheetlet to commemorate the 60th anniversary of the founding of the “Worker-Peasant Red Guards”.

From the official release:

The Worker-Peasant Red Guards were founded on January 14 Juche 48 (1959) under the initiative and leadership of the great leader Comrade Kim Il Sung. The birth of the Worker-Peasants Red Guards is a brilliant fruition of military ideology of self-defence and the policy of arming the whole people set forth by Generalissimo Kim Il Sung who embodied the immortal Juche idea in the military and is a great victory of traditional revolutionary mass-based line of them Workers’ Party of Korea.

Today the Worker-Peasant Red Guards are ready to repulse at a stroke any aggressive manoeuvres of the enemy and to firmly defend the socialist system and the people’s lives and property under the leadership of the respected Supreme Leader Comrade Kim Jong Un.

The two 50 won stamps in the sheetlet:

The stamp sheetlet is also available on FDC: 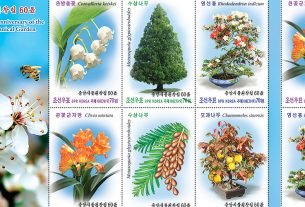 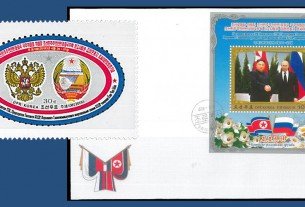 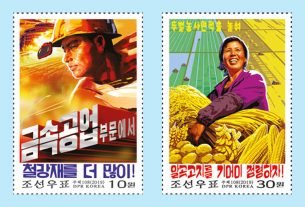