Home > Philatelic Subjects > Other stamps > The Envelopes for Mailing Valuables

Although the title of this article might suggest that these postal envelopes could be used to mail anything of value, they essentially are almost exclusively used to mail money. Up to 1987, I have found 13 different types of these envelopes, and I welcome any possible additions to my list. Some differences are major, and several are quite minor.

The valuables envelope usually came with an inner lining of whitish native paper, but the collector of these envelopes will usually find that the inner envelope is missing. To use these envelopes or to send money was always a post office job. The sender first had to buy the special envelope. Then the sender and the post-al clerk would both confirm the amount that was being sent, and this amount was written into the special panel for the amount. The envelope flap was pasted down and the seals applied; two seals to envelope type #1 and four seals to be used on the later types of envelopes. After the seals were applied, the sender would “toejiang”/use his personal chop on all of the seals, and one of the illustrations shows this quite well.

In preparation for the use of these envelopes, the post office would often “throw” four seals into the envelope. As the laxity in the use of the seals increased at the post office, one could often find four unused seals inside the used envelopes. Then it got to the point where the seals were too much of a bother even to use. Some of the older type envelopes were well “toejianged,” and you could see five or six different personal chops of responsible postal personnel who had applied their chop as the envelope went along its way.

One can find envelopes in which the flap was never pasted down, which suggests that every responsible person was going to count the money themselves and not trust the count of someone else. Using seals and personal chops also became more lax, and it was often easy to find envelopes without seals, and without personal chops, and a degree of informality might be found.

The rest of this article is for KSS members only. Please login.
Tagged 엽서류 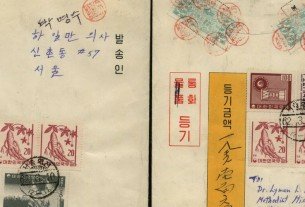 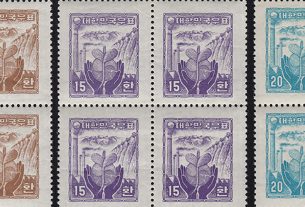 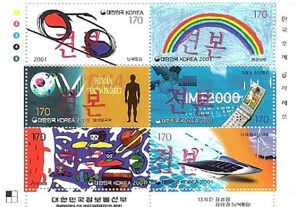