Every philatelic area and era has its “Are these real or not?” subjects. Collecting expensive “specialties” such as overprints or surcharges on top of relatively cheap stamps, making it especially worthwhile to create forgeries for the philatelic market, without proper knowledge is asking for trouble. Overprints and surcharges, especially when used in very limited numbers at best, are especially prone to receive a lot of attention from forgers because they are much easier to produce than complete stamps but come at premium prices.

One of those specialties are the 1950 DPRK overprints on 1949 ROK stamps. Issued during the early months of the Korean War, these stamps are known with several types of overprints. Are they for real? Some are, some are not. It is always good to question perceived wisdom. However, it seems we have enough evidence to underline the authenticity and genuine usage for postal purpose of the 10 won, 20 won and 30 won values.

To begin with: there is enough contemporary published information regarding these stamps, including details of the printers who were considered for, and who ultimately received, the contract to overprint the stamps. There is also a first-hand account in a diary kept by a collector in Seoul, who sold his suit to buy the stamps from his local post office. He destroyed them immediately the capital was liberated by UN Forces!

Now of course the question is: how many other covers, besides some of the examples shown here, do we know of? If you have more examples, either of real or forged covers (yes, forgeries are also important, as a warning to fellow collectors!), please leave your remarks below and we will get back to you. 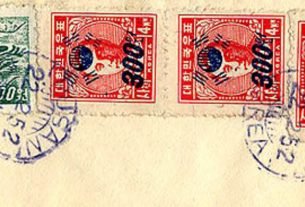 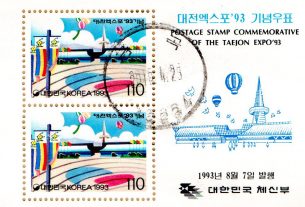 How to spot nonsense catalogue values?