The insured (declared value) system was introduced in Japan in 1900 for cash/bonds/securities. With the issuance of the special envelopes in 1901, the usage of ordinary envelopes for these valuables became forbidden. In 1910, non-official envelopes became readmitted for items larger than the official envelopes, like jewels, art etc. provided they were in previously unused condition. Cash enclosure remained restricted to official envelopes throughout. These official envelopes came in two sizes, small and large. The latter ones were discontinued after August 31, 1918.

These envelopes were introduced in Japan (+IJPO, colonies, leaseholds) by December 1, 1901 and are used until today. The style was with cross-shaped blue imprint on front to 1937, after 1937 various styles. There was/is a nominal paper cost selling fee usually imprinted in a corner. The envelopes invariably came with a minimum of 4 violet (pre-WWII style) paper seals to be pasted over the corners and tied by the personal seal of the sender (or the company/authority seal).

The rest of this article is for KSS members only. Please login.
Tagged Postal history Registered mail Registration seals 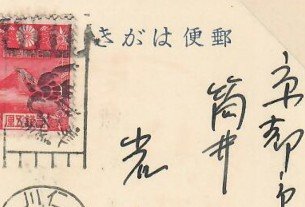 2 thoughts on “Cash-insurance envelopes used in Korea (some backgrounds)”