Home > Korean Philately > Articles > Where are all the post office forms? (1981)

A philatelist has been described as a collector afflicted with an insatiable curiosity about postal material in general and postal history of one particular area or era. For some 20 years, the post office forms illustrated have been part of a Korea collection. They are nothing special: most collectors need not concern themselves with such material. To share or not to share the knowledge of its existence is the question. A few collectors may have similar items.

That even a few collectors might be interested may justify this use of space in Korean Philately. If anyone senses that this article is written with tongue-in-cheek, they may be right. It is one thing to take one’s interest in philately seriously but often a philatelist takes himself seriously and becomes obnoxious, or at best, abrasive. Such a situation does not further the cause of stamp collecting.

Once upon a time, between 1958 and 1955, one Korea collector made an attempt to acquire all the post office forms available during the period With one exception, repeated letters to persons in Korea requesting blank and used forms drew absolute blanks. For some six years of philatelic agony, this collector was haunted by the thoughts of all this postal material going into waste baskets or being used to light fires in kitchen stoves all over Korea. Unable to bear this pain any longer, he gave up.

But all was not lost. There was one response: there was an English clergyman in Korea. At some point, the Reverend C. Richard Rutt joined the Korea Stamp Society. English clergymen have been notable because of their idiosyncrasies. Thus, most are seldom surprised nor do they question the aberrations or obsessions they encounter in other persons.

The Reverend Mr. Rutt taught at the Anglican Seminary in Seoul. He became the first Bishop of the newly created Diocese of Taejon. He is now retired and has returned to England. Thus, to the Lord Bishop of Taejon we owe the salvaging of a small corpus of postal material that otherwise would have been lost. 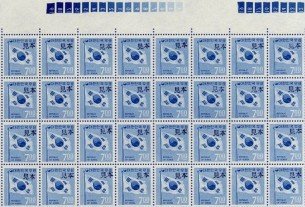 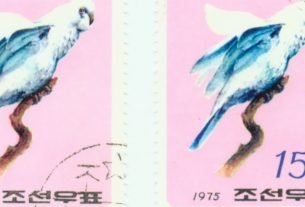