When new Souvenir Sheets come out, at the issuing post offices there is a line-up outside of the crowds of people who are trying to get them. At 8 .30 AM, a P. O. official will then come out and hand out slips of paper specially marked which allow the owner to then go in and buy just one souvenir sheet. If an individual collects a few slips from his friends he can go in and buy one sheet for each slip. Thus, the buyer has bought a sheet at 40 H or about 4 for the usual commemorative issues. The dealer who then is trying to get some stock in souvenir sheets has to buy singly from these different individuals. So for him to get stock in souvenir sheets he has to pay 80H to 100H apiece.

Now, if it seems like an issue is going to be a popular one, then the individuals may decide that they won’t let the sheet go to the dealer unless they get 200H to 400H or 20 to 404 each. This usually happens with the UN issues or those that many nations are commemorating together. Examples are the high prices on UNESCO, World Refugee, Olympics ’60 and UN 15th Anniversary. All these issues are not rarer in numbers than their contemporaries, they are just more popular and very speculative.

Now, of course, the question comes up, if the souvenir sheet sales for the interest of obtaining U. S. dollars is true, who is getting all the profits, KPC, some members of the postal department, or the Korean government?. If KPC gets all the profits, then the P. 0. Department is favoring this group tremendously. If by any chance the government gets the profits ( and this is denied by dealers in Korea), then it has done so by raising the price of the souvenir sheets over their face value and also putting Korean dealers and buyers to a marked disadvantage. What do you think?

Editor's Notes (1961 and 2018)
Editor’s Note (Robert Jones, 1961): Mr. Hale’s comments on the procedures for the sale of the souvenir sheets appear to indicate that the person (or group) with the desire and money can purchase the bulk of these sheets.

Editor’s Note (2019): Unfortunately we had no images of 1961 hwan value souvenir sheets when recreating this article, but here are some from 1965 (from Maynard Redeker’s collection). This article was originally published in 1961 and is republished here to give an idea of what was happening at the time. 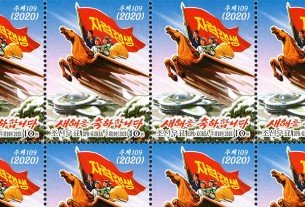 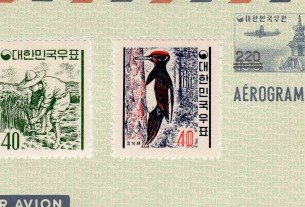