Despite the fact that no inscriptions are found on the observatory Do any carvings designed as footings for the mounting of instruments, an no Astronomical instruments of Silla except a quadrant of an old stone sundial have been found, yet surely the tower was used for scientific purposes rather than religious as Father Richard Rutt suggested (see KP Vol XII no. 2, May 1963, p.56).

Carl Rufus, one time missionary in Korea, mathematician and astronomer has two articles in print, ‘A Trip to Kyungju, ‘Korea Magazine, Dec. 1917, p.532-41 , and ‘Astronomy in Korea’ Vol XXVI Transactions of the Korea Branch of the Royal Asiatic Society, 48 pages and 34 figures. Mr. Rufus was familiar with the references in the ‘Mun Kumpi go’ and records found at the museum in Kyungju confirmed the historical information he already had. In addition he found three poems bearing on the observatory. Surely a poet’s word is worth repeating — and believing,

The Silla’s grandeur rose to mountain heights
and fell ….. her tower stands,
It cleaves the blue, where once her sages peered
To read a message in the sky and bring a boon to earth…

or 14 stanzas on Silla’s observatory, giving praise to its lasting structure, only two concerning its use:

The faithful constellations and wandering planets all
In measured orbits traveled before thy monarch’s fall
The smallest starlit cruiser that sailed thy sky of blue
Was ordered by the captain and guided by the crew.

We ourselves have seen the four mythological animals on the inner wall of the Koguryu tombs west of Pyengyang, the Blue Dragon, Chung Ryong, White Tiger, Park Ho, Red Bird, Chu Chak and Black Tortoise, Hyun Moo which also encircle the zodiac. We have seen material from the Lolang tombs across the river from Pyengyang, tiles representing the oldest astronomical survival, and remains of two divination sets which have a resemblance to the diagram of the 28 constellations all of which were linked with time reckoning and calendar making.

We have stood on Tangun’s altar on Marisan, Kang Wha Island … foundation round, upper part square … heaven and earth. Observers were sent here to make observations during the Lee Dynasty. Why not before? In primitive cultures special attention is given to the observation of heavenly bodies for practical purposes, especially agriculture. When Mr. Rufus asked tie Kyungju museum director why these symbols found in the north were not found here, he said “In the north they were astrologers, in Silla astronomers.”

The tower was built in 647, in 749 there was a doctor of astronomy. Astronomical charts and calendars are mentioned in history, and carved stone figures represent the twelve animals of the zodiac.

We knew Dr. David Won Chul Lee, astronomer at Chosen Christian College who checked the records of comets with Mr. Rufus — 29 in all in Silla.

Astronomy suffered a decline in the Koryu era but records were kept even during the turmoil of the Mongol invasions. But astrology, and divination were also wide spread. The Yi Dynasty revived and revised astronomy and made great strides after contact with foreigners in Peking. The year 1770 saw the publication of the ‘Mun Kum pi go’ which Mr. Rufus used in its 1908 edition to gather up the pages of material in his Royal Asiatic article, which closes with this statement:

Without these two eyes ( telescope and spectroscope ) of the modern observatory, the astronomy of the twentieth century would he very similar in many respects to the astronomy of the day of King Sei Chong (1419-1451) and not far advanced beyond the nights when the royal astronomer of Silla kept watch of the heavens from the top of the old observatory at Kyungju.
Originally published in KP Vol. XIII No. 3 (August 1964)
This article was originally published in KP in 1964. The observatory in this article, officially known by its Korean name Cheomseongdae, has a Wikipedia lemma. Part of that text reads: “Cheomseongdae (Hangul: 첨성대) is an astronomical observatory in Gyeongju, South Korea. Cheomseongdae means star-gazing tower in Korean. Cheomseongdae is the oldest surviving astronomical observatory in Asia, and possibly even the world. It was constructed in the 7th century in the kingdom of Silla, whose capital was Seorabeol, or present-day Gyeongju (Hangul: 경주).”
Tagged Korean Philately 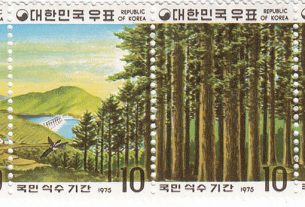 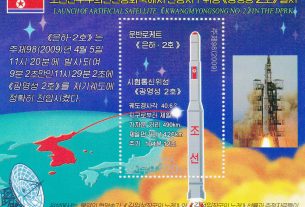