In 1946 while I was in Seoul I picked up a cover that I prize highly because of its unusualness. This cover was brought to me by one of the Korean examiners in the Censorship Office. His reason for showing it to me was that the cover was franked with stamps of both the North Korean and South Korean zones.

It had two copies of the 20ch red North Korean issue which Scott shows under “Tentative” listings, and one copy of the 10ch South Korean issue, Scott #63. All three stamps were across the top end of the native style envelope and are tied nicely by the cancellations.

The rest of this article is for KSS members only. Please login.
Reprinted from KP, Vol. II, No. 8, May 1953
This article was first published in 1953 and republished in KP in 1968. The original North-South border, at the 38 parallel, changed after the Korean War. At present the DMZ is effectively the border, with Goseong-gun (Kosŏng, 고성군) existing on both sides of the border:

Also notice the follow-up article on this cover written by Anthony Bard. 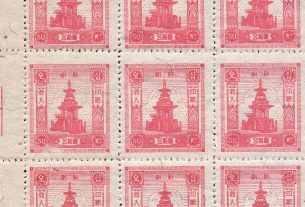 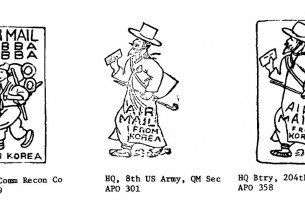 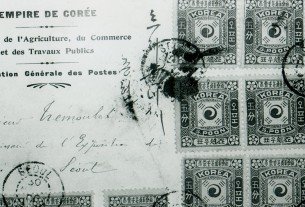