As a philatelist, my principal interest has been in the semiotics of the stamps, the meaning of their design. The first stamps issued by a national government or stamp issuing authority are particularly intriguing. This is a government’s first opportunity to present itself graphically to the world. What do they put on their very first stamps and why?

In this brief article, I will look at the first sets of stamps issued by the Kingdom of Chosŏn (朝鮮, 1392-1910) in 1884 and again in 1895. A series of stamps in five values (5, 10, 25, 50 and 100 mun) was ordered from the Japanese Government Printing Office on 22 April of 1884. By early October, only the first two values were in circulation. On 17 October, during a banquet held to celebrate the formation of a European-style postal system, a group of radical reformers attempted to assassinate leading conservative figures present at the banquet. Although the ‘Post Office Coup’ was eventually unsuccessful, the fledgling postal system ceased to function for more than a decade. On 22 July, 1895, following the re-establishment of the Post Office, the government issued a set of four newly designed stamps – in 5, 10, 25 and 50 p’un (푼) values. Thus, Korea may be the only country which can claim to have two different sets of first issues!

Design of the Initial First Series
The only stamps from 1884 in circulation were the 5 mun (五文), and 10 mun (十文) values. The designs of both stamps have as the central feature a stylised version of the yin-yang [Korean ŭmyang], the entwined double tear-drop symbol representing the metaphilosophical concepts of Neo-Confucian and Daoist philosophy. This symbol has been used on Korean flags or banners since at least the end of the sixteenth century. Interestingly, the 5 mun stamp is trilingual, giving the name of the state and its post office in Chinese characters and Korean script, and the stamp’s value additionally in Roman letters and ‘Arabic’ numbers. However, the name of the state is not given in any non-East Asian script, but in Chinese characters in a bar at the top, and in the Korean alphabet in a bar at the bottom. Although the phrasing is read from right to left in the traditional East Asian manner, it is not given in columnar form (as traditional) but in a horizontal line. The value of the stamp is given twice in Korean script (repeating the value in the ovals on the top left and right), twice in Chinese characters (repeating the value in the left- and right-hand sides as a column), and once in Roman script in the bottom corner ovals. In the lower left-hand oval, the numeric value is given, and in the right-hand oval the name of the currency.

The 10 mun value has a similar focus on the yin-yang symbol as the 5 mun value, but with a slightly different design. The yin-yang emblem is surrounded on the top with the phrase in Chinese characters ‘Tae Chosŏn-guk uch’o’ [Great Chosŏn Post Office] reading linearly from right to left. The same phrase is given in the Korean phonetic script at the bottom of the symbol and also is read from right to left. The value of the stamp is given at the top in the ovals in the indigenous script and reads from right to left, one syllable in each oval. The values are given in Chinese characters in the ovals at the bottom, reading from right to left, one syllable (character) to each oval. English phrasing appears at the top and in the centre of the left and right sides. It reads ‘Corean’ at the top, and ‘Post’ on the left- and right-hand sides. In the 1880s, the name of the Korean state was always written in English with a ‘C’ rather than a ‘K’. The value of the stamp is given in Roman letters and Arabic numerals in the centre of the bottom bar. The value is abbreviated as Mn. for mun.

It was an East Asian convention that the sovereign’s head did not appear on stamps or on any public document. Instead of the Korean monarch’s head, the yin-yang symbol representing the philosophy undergirding the system of state governance represents the nation.

The text of the stamps indicates the cultural and political change which was beginning to occur. The inscriptions on the stamps shows the use of three different scripts (Chinese, Korean and Roman), and two sets of numerals (Chinese and ‘Arabic’). Before the advent of a European-style postal system, all government documents would have been in the East Asian classical written language, i.e., Chinese characters. Consequently, the stamp shows elements both of conservatism (the yin-yang symbol, Chinese script), and a breaking with the past (Korean script, Western script, ‘Arabic’ numerals). The use of the indigenous script is significant because up to this point, the élite had disdained its use. The same could not be said of the use of a non-East Asian language. This is a first.

Design of the Second First Series
The second series of 1895 illustrates many of the points made about the 1884 issues signalling both conservation of tradition, and modernity, and using abstract symbols to represent the state rather than the monarch’s image. However, this first series was not printed in Japan, but in America by Andrew D. Graham Bank Notes of Washington, D.C. The series consisted of four values of 5, 10, 25, and 50 p’un.

Unlike the earlier series, the four stamps have an identical design except for the change in value. The four ovals in the four corners depict the plum flower, symbol of the royal house. The name of the state and its post officer is given at the top in an antique form of Chinese characters, and at the bottom in the indigenous script. The values are given in Chinese characters on the left-hand side, and in Korean script on the right-hand side. It is given again in Roman letters and ‘Arabic’ numerals at the bottom centre. The name of the state is given in English, but now spelled with a ‘K’. In the centre is the Korean national flag, the focus of which is the yin-yang symbol. However in the four corners of the flag are four of the eight trigrams or cosmic symbols used in both Neo-Confucianism and Daoism. This stamp emphasises the royal house’s association (plum blossom as the royal emblem) with progress and modernity in a trilingual document. We also see for the first time the national flag depicted as a symbol of the nation on a public document. The flag has the same meaning as the yin-yang symbol in the 1884 series, projecting in an abstract manner the philosophy underpinning the system of governance.

These two sets of first stamps project both adherence to tradition, and a focus on modernity. The very use of a postage stamp is ‘modern’. Moreover, the use of multiple scripts and numerals is an indication of modernity and cosmopolitanism. Tradition or continuity is indicated by the use of the traditional formal script, Chinese characters, and by the use of the yin-yang symbol. Appearing on its own or on the flag, the yin-yang symbol seems to imply that modernity does not mean discarding the cultural foundations of the nation. The flag itself represents the nation (a sign of modernity) but also has roots in the symbols on traditional military banners. These two sets of stamps well represent the period of dramatic socio-political change of the 1880s and 1890s in which the last Korean kingdom was caught up. 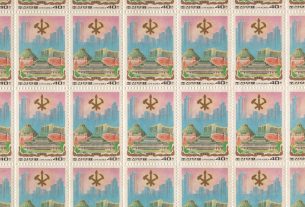 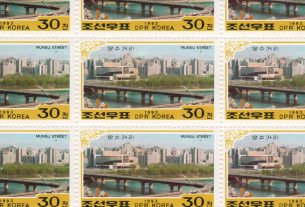 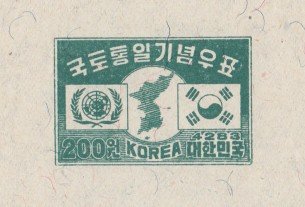