By writing this article, this author is hoping that it will create interest and more information will be forthcoming from other readers of the Korea Stamp Society (KSS) website. The subject is known by different names. Very little literature has been published, at least in English, about, what Jim Kerr called, in his “Korean Kingdom and Empire Philatelic Catalog and Handbook”: “Souvenir Books” or “Presentation Albums”. Mizuhara Meiso called them: “Commemorative Souvenir Books” in his book, “Korean Postal History 1884-1905”.

To the author’s knowledge there has never been an article published in the Korean Philately (KP) that describes these books, other than a bit of auction news when they were offered for sale. Almost all of the previously published information in English on these souvenir books was either in Kerr’s or Meiso’s books.

It will be confusing as we discuss these souvenir books. It was believed in older previously written literature on these souvenir books, that they were first issued by the Japanese in July of 1905, after Japan took over control of the Korean postal system. They contain some actual early stamps of Korea, pasted into the books, as well as some images, and other materials. See Figure 1 for an example of the cover of one of these books. Most of the early versions have the same cover.

It was originally believed that a second edition was issued in January, 1906. See Figures 2 and 3, for examples of the first two pages after the title page of images/actual stamps in one of these early souvenir books. In more recent discussions, some Korean blogs have indicated that the first edition was published in 1906 and a second edition published in 1909. Although this later information for the publishing dates appears to conflict with almost all of the earlier published research on the souvenir books, there is some strong evidence to support that a version was published in 1909 and the first edition may have been distributed in 1906.

A discussion including some of the translation of the material on the blogs will follow later in the article.

Meiso wrote that the first souvenir books were presented to the members of the Royal family, nobility, dignitaries, and diplomats. These were issued after the Japanese “amalgamation” of the Korean postal service. He reported that the first edition was published by the Ministry of Communications.

Meiso believed that a second souvenir book was published in January, 1906 by the Residency-General Communications Management Bureau, and it was nearly identical to the first book, with the first edition having different characters or script on the lower left side of the title page, compared to the script in the second edition. He stated he could not tell the difference between the two editions as he has not seen them side-by-side.

Meiso wrote that the second book was given to executives of the Ministry of Communications and the leaders of the Residency-General. Meiso states that there were 300 copies made, respectively of both books, but the source for this information is not known. Other experts agree that 300 were issued of the first edition, but do not believe it is known how many were issued of the second edition. One dealer over many years has seen about a dozen copies of both the first and second souvenir books. As noted previously, some Korean bloggers believe this second edition was not published until 1909. Following is another blog link and a translation of some of the Korean script:

This Stamp Book was known to issue to commemorate the combining of Korea-Japan Communications in 1905 (Meiji 38). I believe it is correct to classify the first issue was made by Japanese Communication Ministry (체신성 /  逓信省; Che Shin Sung) in January of 1906 while the second issue by Government-General (통감부 통신관리국 / 統監府 通信管理局; Tong Gam Bu Tong Shin Gwan Ri Guk) was made on May of 1909. Because the second stamp book was probably made with stamps left in inventory as the prohibition of the usage of any Korean Empire stamps went in effect under Government-General Order Notice #12 as of August 31, 1909. (Meiji 42).

Toward the end of the Stamp Book the printed official notice by the name of Vice Government General as of May 22, 1909 was attached.

See Figure 6c for the second to last page, where the notice is pasted into the souvenir book. It is on the right page of the two pages. It is on the fourth column from the right and on the top half. It has the date of Myung Chi (in Korean Hanji) or Meiji (in Japanese characters) 42, which is 1909, May 22.

So, are we really confused now? It appears that at least this souvenir book may have been issued in 1909. But, why was this notice placed on the back of this souvenir book? This author has not seen these notices pasted in the back of any other books. Another question is, were there more than two versions printed, perhaps three?

This seems to be little doubt that the first edition souvenir books have no small characters on the title page, but do have the characters 逓信省通信局 (Communications Office of the Ministry of the Communications), printed on the same page where the Japanese Amalgamation commemorative is pasted. Also, it appears that the second editions have the characters 総督府通信管 理局 (Communications Supervisory Bureau of the Government General; alternatively can also be translated as Telecommunications Department of the Resident-General) printed on the lower left side on the title pages. The author wonders when all of these souvenir books were actually issued. 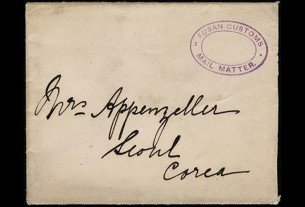 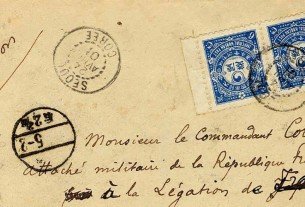