The Gab-sin coup d’etat (甲申政變; 갑신정변) of 4 December 1884 (Lunar calendar 10. 17.), attempted by the reformers at the opening ceremony of the post office, failed. All main figures were killed including Mr. Young-Sik Hong whose constant efforts had led to the issuing of a Royal decree to establish the Department of Post Office on 22 April 1884 (Lunar 3. 27.), which started the postal services on 18 November 1884 (Lunar 10. 1.). After the coup the post office was forcefully shut down. The postal service operated of only 17 days.

The first one of these two entires has a set of the first issue of the “TAEGEUK” series stamps. They are 5, 10, 25 and 50 Poon. The double circle cancellations were used on them. The date of the cancellation was “大朝鮮 建陽 元年 二月 二十九日 甲 東 / Great Choson Gun-yang 1st year Feb. 29, 1896 Dong-rae. It was sent to Busan (Inland use), with a very clear cancellation.

The rest of this article is for KSS members only. Please login.
My Online Exhibition of KOREA Stamps 1884-1905 can be seen at: https://koreastamps1884-1905.com
Tagged Postal history Tae Geuk series 대조선국-대한제국 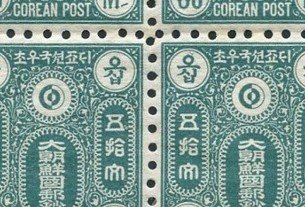