Although an alphabet (now known as Han’gŭl) was created by the middle of the fifteenth century, it did not begin to achieve wide-spread use until the end of the nineteenth century with the translation of the Bible and the creation of vernacular newspapers. Until the end of the twentieth century most newspapers and formal documents consisted largely of Chinese characters placed in Korean sentences with the necessary grammatical particles and other linguistic forms given in Han’gŭl.

Although most of the words appearing on stamps are written in Han’gŭl, the words are principally the phonetic rendering of Chinese characters. When writing Korean using the alphabet, it is the convention that the letters in a word are assembled into syllable clusters. There is no reason to do this other than the fact that Chinese characters are syllables and not individual sounds as in alphabet. It made sense to the creators of the alphabet to write the syllables in a cluster because these clusters would often refer back to the Chinese characters which were syllables. However, the individual letters of the Korean alphabet can be written out linearly as in European languages. 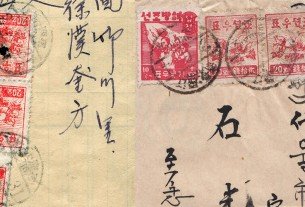 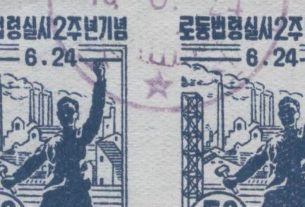