Home > Korean Philately > Q&A > Reader’s Question: Was their a Russian influence on the 1903 Falcon stamps’ design?

(Editor: a question from reader Jim, currently living in South Korea:) “I’m interested in any information about how the 1903 Postes Imperiales Coree stamp came to be designed and authorized for issue, especially in that it seems that this stamp had Russian influence just prior to the Russo-Japanese War as Russia’s involvement in Korea was waning.”

That’s of course a very good question! To start with here are the stamps Jim is talking about, the 1903 Falcon series (KPSC 36-48 / Scott 39-51) from the Korean Empire period:

The stamps shown are in Robert Finder‘s collection, who also added this information:

Backgrounds to 1903 Falcon stamps
The Falcon stamps were made because after Korea joined the UPU, a French “postal expert” named J.V.E. Clemencet insisted that they be made in France. After they were made, it was observed that: “the issue lacks many of the characteristics and the subjectivity of Korea”, Meiso, page 315. They were ordered in 1900, but not delivered until 1903. So the design became:

“Each value was printed in a different color. That was the way of producing colonial postage stamps for France around that time. The falcon symbolizing the sovereignty of the emperor is drawn in the central circle holding a baton (or a sword) and a globe. On the underside of each wing are four yin-yang(taegek smbols). The name of the nation is shown by Chinese characters in the upper panel, by hankul letters and French in the central circle. The face value is indicated by hankul in a small panel and by Arabic numerals in a circle at the bottom. The currency units are written as re, c (for cheon) and $ (for won). This was the first and last time for Korean postage stamps to use the “$” symbol. The background design make much use of the plum which was the national flower of Imperial Korea.” Meiso, page 316.

In Kerr’s book, on page 52, he states that Korea had a coin set with the same falcon and they called it the “Russian Issue” struck by the Yongsan Mint in 1901. He writes also: “Russian ascendancy in Korea at the turn of the century suggest that the resemblance to the Russian Imperial eagle was more than coincidence.”

And also take a look at pages 67-8 of the KSS Philatelic Handbook for Korea 1884-1905, Meiso quotes it in his book. He says he doesn’t know if it is correct or not, but he is reprinting the text for information.

So, now we know why this issue has an European look.

Below are some examples of the stamps in multiples, to show how the stamps “moved” all over the paper, with different margins etc.:

If you have more information please leave a comment below this article. 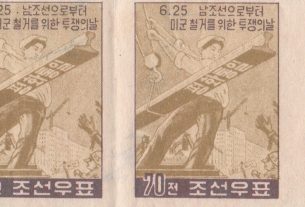 1959 “Peaceful Reunification of Korea” stamps: real, fake, or a reprint? 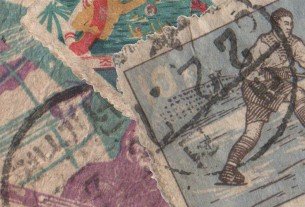 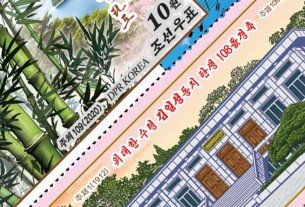 Reader’s Question: How to order from KoreaPost and what about all these new DPRK stamps?