Home > News > New Releases DPRK > KSC5299: Let us advance vigorously towards the Eighth Party Congress by making the flames of the 80-day campaign flare up!

(News from 조선우표사 / Korea Stamp Corporation) On 17 November 2020 the Korea Stamp Corporation issued a stamp commemorating the 19th meeting of the Political Bureau. The KSC stated: “The 19th meeting of the Political Bureau of the Seventh Central Committee of the Workers’ Party of Korea made a crucial decision to wage an 80-day campaign involving the entire Party and the whole country until the end of the year in order to proudly conclude this year’s struggle and greet the Eighth Party Congress with a high sense of political enthusiasm and labor achievements.“

The text continued: “In hearty response to the Party’s decision, the Korean people are striving to further intensify the state emergency antiepidemic work and work the heroic feats by fully displaying the spirit of self-reliance. The stamp reflects the images of the Korean people from all walks of life who are striving in several fields including antiepidemic sector and the rehabilitation project sites together with letters of slogan “Let us advance vigorously towards the Eighth Party Congress by making the flames of the 80-day campaign flare up!”

The stamp issued is: 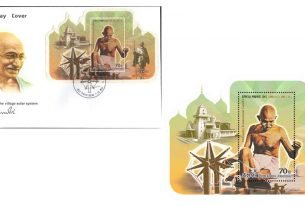 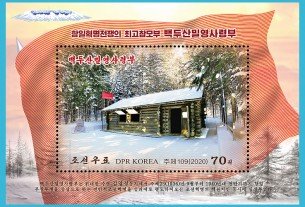 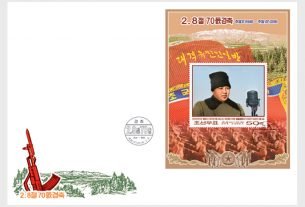