One of our readers, Jordan, sent scans of four complete sheets of North Korean stamps asking what we know about these particular stamps. The first thing to do when answering such questions is to look through either the “Korean Stamp Catalogue 1946-2015” (if the stamps were issued before December 2015) or on the Korea Stamp Corporation’s international website. But what if you can’t find them in either of these publications?

Well, we list them on the KSS website of course so our members, some of whom are DPRK specialists, can have a look. But before you have that look, might we proffer an idea? What if these four stamps are the missing series KSC5170-KSC5173? If you look at the new issues listing on the KSS website for North Korea you will notice two sets of stamps missing. This can be deduced from the distinct gaps in the numbering system (no, we didn’t forget to list them!). From May 2018 to September 2018 the stamps issued were:

Notice the stamps listed before and after these missing numbers are very normal issues, without any “difficult” message. Most of these were created for sale to international dealers/collectors, such as those series issued for the stamp exhibitions or showing thematic designs such as “sports” or “vehicles”, while the KSC5176A-5176C is just the usual type of propaganda stamp.

However, the four stamps shown here are not the usual propaganda stamps of course. They are not unique in depicting the US being somehow destroyed by all-powerful North Korean soldiers, but they did come at the wrong time. This was the time when US President D. Trump was actively talking with his North Korean counterpart, Kim Jong-Un. And so perhaps this type of stamp was a bit “difficult” all of a sudden…?

Here are the sheets in order of postal value (low to high), which probably corresponds to KSC5170-KSC5173:

One of the sheets comes with at least one variety, in position 12:

Perhaps you can spot other varieties as well?

The stamps KSC5173B-5173D were found previously, we have shown them on these pages already. But what do you think, dear reader? Are these four stamps the (unlisted? unissued? retracted?) series KSC5170-KSC5173? And if you happen to have FDC’s or other related philatelic items (such as for instance the new issue leaflet) please contact us, we would like to show those as well. 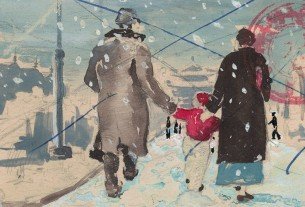 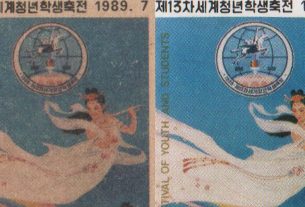