As I looking through my old Korean Philately magazines in preparation for the KP 70th anniversary issue of the Korea Stamp Society I came across something that I had not noticed before. On the back of a facsimile of the first KP issued on October 1, 1951, I found a summary of the KSS from 1951-1976 for the 25th anniversary of the KSS. The author is not listed, but it was Walter F. Evans. The following is a transcript of the summary.

In Summer 1951, Arthur Korzyn and Harold D. Bearce inserted notices in philatelic publications, inviting persons interested in forming a group to study Korean Stamps to and contact them. Eventually, six people confessed their addiction and in late September, 1951, the new “Korean Study Group” began to function.

Although the group had not yet fully organized, Bearce undertook the duties of managing it and edited a bulletin — the first issue of KOREAN PHILATELY. The single, typewritten sheet, dated October 1, 1951, was mailed from Kansas City, Missouri. The six “founding fathers” of our Society were: Harold D. Bearce (1), Arthur Korzyn (2), W. Lloyd Heath (3) Paul Randolph (4), Forrest W. Calkins (5) and Sture Lyungdahl (6); only Calkins is still with us.

The name, THE KOREA STAMP SOCIETY, was proposed in the February, 1952, issue of the bulletin and was adopted when no objections were forthcoming. In the same issue (Volume I, Number 5) the first membership list was published. Along with those already listed were R. P. Alexander (7), A. L. Nicholson (8), Loren B. Thompson (9), and Robert W. Hopkins (10). At this time, the set of forty-four stamps with flags of those United Nations Forces aiding the fledgling Republic of Korea could be bought for $5.00, while the set of presentation sheets cost $16.00. The first elections for officers found Albert L. Kemmesies as President, Arthur Korzyn as Secretary and Forrest Calkins as Treasurer. KOREAN PHILATELY was still published on a monthly basis, and much of the contents were supplied by Heath and Korzyn.

By 1958, the periodical had become a quarterly which was edited by Stanley P. Billey and was mimeographed. At this time, the Society adopted its membership year (April 1 to the next March 31), and the Officers offered a set of by-laws, which was adopted. Norman W. Townsend, Jr., was now President, having succeeded Kemmesies in 1953. In Volume VII, Number 2, of K.P., we find the often seen plea of the officers: “We need more members,” and in answer to the call, Paul Gleye became the 185th member. During these early years, William J. Rhee was the major source of detailed in- Formation from Korea. He also did a considerable amount of detective work concerning the origins of some varieties (as the imperforate flag stamps) which appeared on the market, and he kept the members of the Society alert to new issues.

Early in the next year, Luther L. Dilley advised the members that the first edition of the specialised catalogue was well under way as some pages were already at the printer and others were ready to go. The July issue of K.P. was the last edited by Billey owing to his untimely death, and Robert C. Jones accepted the task of Editor on the next several issues of the quarterly. Luke Dilley had proposed sales circuits for the members, and he soon advised them of the need for more stamps and that used material was scarce. Volume IX, Number 1, was the first issue of the publication to be lithographed, and Associate Editor David G. Phillips provided the necessary connection for this improvement. In order to enjoy better reproduction of illustrations, the 160 active members had to pay $3.00 dues rather than the $2.00 they had enjoyed since 1951: the cost of preparing a single issue was nearly $100.00! However, there was good news in the form of an announcement by Dilley that the revision of the catalogue was well along toward completion, and a proposal from Howard G. Maxcy that the Society sponsor an award certificate to those exhibiting Korean material.

The tenth anniversary edition of KOREAN PHILATELY (Volume X, Number 4: November, 1961) contained a summary by Calkins on the origin of the Society. Robert Bruce had been accepted as member number 320 — and several others had joined in response to the special edition of LINN’S WEEKLY STAMP NEWS on the Society. A revision of the by- laws was adopted, and an advertiser offered Japanese cards used in Korea for only a dollar each. About that time, a set of the U.N. flag stamps realised $53.00 at auction, but the set of sheets sold for only $46.00. Volume XI, Number 2, Of KOREAN PHILATELY was the first issue published in the present format. Shortly after this, David Phillips assumed the post of Editor, and James W. Kerr sent forth the good news that his work on material from old Korea was proceeding nicely. The first K.S.S. exhibit award went to Wylie Flack, a non-member, who had displayed Korean covers and stamp history. The Society was in the process of publishing a translation of the Korea section of the Kohl HANDBUCH, and the first local chapter was organised in the Washington, D.C. area; it was soon followed by a chapter in the New York region. A major reference work on the forgeries which are common to early Korean material was published in 1962 by Lynn R. Brady and Varro E. Tyler, Jr., both members, the Handbook of Philatelic forgeries of the Korean Empire is an invaluable reference to collecting this material.

The Korean Embassy to Washington sponsored a show to honor the fifteenth anniversary of the Society; a hand stamped cachet was applied to covers for those attending – the device had been prepared by the Ministry of Communications. Henry Hoffheimer succeeded Townsend as President this year and was succeeded by Kerr as Vice-president. Kerr’s catalogue of Kingdom and Empire material became available, and was awarded a silver medal at the SIPEX exhibit in May. A memorable event for those attending the show was a meeting of the Society at which President Hoffheimer presented the first Certificate for Meritorious Service to the Society to Forrest Calkins and Dave Phillips. Hoffheimer had proposed and prepared the award.

The year 1966 was an especially rich year for Korean reference literature. In addition to Kerr’s fine work, the first extensive reference on Korean Christmas-Tuberculosis seals was assembled by Helen K. Zirkle, and published for the Society through Phillips. The Society welcomed member number 439, Ray Russell, and, with Lyman L. Hale doing the work, it produced a major ‘count-down’ of available material which showed that used material was scarce.

On August 8, 1968, the Society was incorporated under the laws of the District of Columbia. The details of this project were handled by Walter Monagan who was awarded the meritorious service award for his effort. As a new decade started, Robert C. Jones was elected President, and John H. Thomas Vice-president; Jones also resumed the task of editing the quarterly. However, early in 1972, his health forced Jones to leave both positions, and Thomas took over presidential duties, while Kerr became Editor. The subsequent elections placed David G. Phillips in the President’s seat until he was succeeded by Joseph B. Franklin in 1974. With Kerr as “YE ED” and Harold L. Klein publishing, KOREAN PHILATELY was awarded a silver ribbon when entered in its first competition.

Another major research project, sponsored by members of the Society and published for it by “The Collectors Club Of New York in 1970”, this PHILATELIC HANDBOOK FOR KOREA, 1884-1905 was edited by Helen Zirkle, who also had chaired the committee preparing the text. Although somewhat controversial, this book was prepared by some of the American philatelists most knowledgeable in the area, and provides the most accessible source in English on this material.

Now, in its Twenty-fifth Anniversary year, THE KOREA STAMP SOCIETY has initiated an expertization committee for Korean (or Korea-related) stamps and covers with Dr. Jayson Hyun chairman; it has co-sponsored a lounge at INTERPHIL 76 and it continues to advance the goals set forth in the by- laws. Millard F. Beatty has joined as member number 752; and KOREAN PHILATELY won a vermeil award at the recent San Jose show. Lyman Hale continues to be a major source for information from Korea — especially for the little items of surprise which turn up now and then to keep doldrums away from collectors of Korean stamps and postal history. The set of U. N. flags stamps has recently sold for $47.00; it is still true that used stamps are scarce; and the Society would like more members — some things just never change.

For a quarter of a century, THE KOREA STAMP SOCIETY has provided a forum in which persons interested in our always fascinating, ever widening specialty can exchange ideas and information. More important than this, however, the Society has kept open a door for friendships to develop among a widespread membership: from the newest to the oldest, from novice to sophisticate, and among all phases of Korean philately these ties do intertwine and enrich the lives of all they unite. 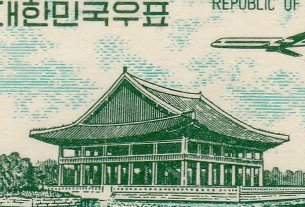 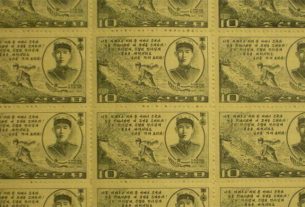