The Chinese Government attached great importance to the Korean and Chinese units differing significantly from each other in formal terms. The Chinese People’s Volunteers received different troop designations, rank insignia and uniforms. Field letters from Korea were given their own troop cancellers (fig. 1), which differed from the Chinese field post letters (fig. 2).

The red Korean line – above – means (according to a somewhat awkward translation): “We’ll hammer the American invaders and bring them to death!” The red Korean line at the bottom means: “Korean People’s Army 5th Anniversary”. At the top in Chinese is the address, Xiaoti Village, Fengshan Township, 4th District, Wuyuan County, Jiangxi Province. The sender is at the bottom: Pioneer Unit, xx (handwriting illegible) Station, 7th District, Xingcheng County, Liaoxi Province (now Liaoning Province). Apparently the home address of the military unit was allowed to be given openly.

Normal soldiers’ letters were always free of postage in the Red Army/People’s Liberation Army. The freedom from postage meant that the letters had to be given to the officers. They checked that no military messages were passed on by the writers which could somehow be of use to the enemy if the letter fell into enemy hands.

The system was widely used, as shown by the envelope in Fig. 2, which was sent in 1951 without it having come directly from a warzone. But perhaps the PLA considered it was still at war as long as Taiwan, Tibet and a few small spots of the country were not yet fully under the control of the people’s government.

Of the type of envelope shown in figure 2, which are also referred to as “Korea Field Post Letters”, there are many covers known without the cancellations shown in fig.1. This concerns covers of the period of 1953-1956. At that time, there were still over a hundred thousand Chinese soldiers in Korea; guarding but no longer fighting, which is why there was certainly time to write letters. In this respect, it is credible that many of these letters are actually from Korea. Unfortunately we don’t have any documentation from which we can conclude the location of a unit. That is why it is difficult to verify letters from the time in question as real Korean letters. Also, mentioning a location in a letter was strictly forbidden.

One should be quite happy if one finds a letter bearing Korean characters, such as the document in figure 1. It doesn’t look “philatelically inspired” but rather like it went through the same hard times as the people had to endure at the time. 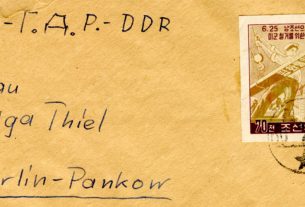 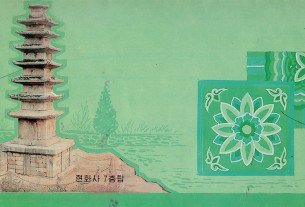