Occasionally South Korean stamps show up on popular (stamp) auction websites with a 10 won overprint on them. But are these overprints real? According to John Sauer in his Monograph 1, Specialized Postal Stationery Catalog of the Republic of Korea, page 7, postal card KPC #PC15 was created with a 10 won surcharge on the old 5 chon card. It was first issued on 1949.5.3 and was superseded by a 20 won surcharge on the same card design on 1950.5.1 (designed at PC16). Luther Dilley’s Korean Stamp Catalog (Part V in our online offering to members) on page 72 identifies these cards as PC3 and PC4.

The overprint therefore was genuinely applied on those cards. But how about the stamps? The first group of stamps bearing such surcharges appeared sometime in the early 1960s. They were mentioned several times in KP in 1961-1962. Here are the relevant texts from those KP’s:

Mr. R. L. Frock from Colorado Springs, Colo. has submitted a group of 30 surcharged stamps, some of which are shown here. These stamps have the surcharge of the revalued postal card pictured on the cover of KP (the fourth illustration from the top on the right hand side, — on the postal card the surcharge is in red ink.)

The surcharged stamps Mr. Frock sends include Scott’s nos. 78, 93, 98, 100-105, 109-113, 121, and C2. The surcharge is found in black and purple. Thus, we have one C4 with the black and one with the purple. Some are mint and some used. In the used the strike is carefully placed on the edges and the post office is the same and in Chinese characters.

Mr. Frock secured these stamps from a dealer in Seoul, and would like any information he can get about them. Are they postal favors, or were they a valid issue?. He reports that originally he had some of them on cover but took them off.

We know of the use of this surcharge for revaluation of the 5 cheun, red (type A4 -Scott) postal card. Further inflation resulted in similar surcharges on this postal card of 20 won and 50 won values.

The Provisional Postal Card Surcharge on regular stamps was reported and illustrated in the May, 1961 issue of KP by Mr. Richard L. Frock #254, Has any other member of KSS seen these or have them in their collection? The surcharge is the same as the 10 won revalued postal card, KSS # PC 3 of the Specialized Catalogue published by Mr. Luther Dilley. Any information about these provisional surcharges on regular stamps would be appreciated by Mr. Frock and your editor.

The PC3 Surcharge on Stamps
Since the discovery of regular stamps of Korea surcharged with the PC4, 10 won revaluation, we have attempted to determine the validity and source of these stamps. No definite information is available as to what their status is. Bill Rhee and Lyman Hale, in Korea, report that they are unknown over there.

Yet, quantities are appearing and the KSS has been requested to verify these stamps, if possible.

The variety and extent of these is apparent from the following listing. Scott’s numbers are used. The letters B (blue) and P (purple) indicate the color of the surcharge:

Japanese Telegraph Revenue Stamps are known with this surcharge.

Under what circumstances these were used, if valid, is not known. At this point it would appear doubtful that they are legitimate since they are unknown in Korea and there are none known on cover.

Of course, when they first appeared in/around 1961, who was to say? Nobody had seen them before. However, since then it has become an established fact that these overprints on these stamps are utterly bogus. Who made them is not known, but they may be of South Korean origin, as that is where Mr. Frock obtained them. Who knows more about these stamps? Please leave your comments below. 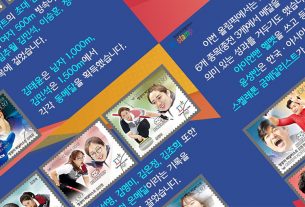 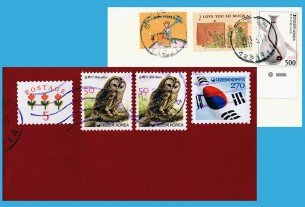 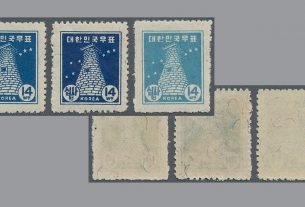 2 thoughts on “The 1950 postal stationery inflationary surcharge on stamps?”