Recently there was a very unusual amount of bidding on group of Korean Empire stamps on eBay that had around nine different bidders with the winning bid at $1200. This set of stamps was brought to the attention of the Korea Stamp Society (KSS) by a reader of the website with three days left in the bidding, when the highest bid at that time was $700. The reader asked “why was the price so high?”

That was a very good question as various members of the KSS looked at the stamps and it appeared very quickly that to them a number of the stamps were obvious fakes, almost all of the Korea second issues appeared to be fake with only two of 5 poon looking to be genuine, the 5 poon used with double circle cancellation and the unused 1st print unused 5 poon. All the Plum Blossom stamps appear to be genuine. But even these genuine stamps are very common. It was then thought that maybe the 3 ch orange had a special cancel that was causing the bidding.

The rest of this article is for KSS members only. Please login. Not a member yet? Join the KSS now, giving you access to ALL articles and downloads on the KSS website. 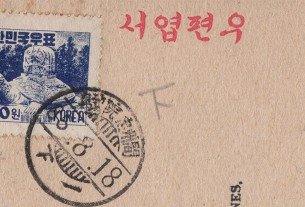 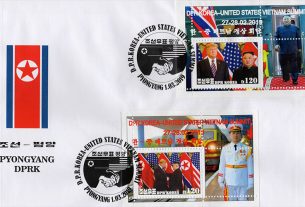 Opinion: Are some or all of the latest “North Korean” peace talk stamps and souvenir sheets fakes or legitimate?