Gwendoline (은산-殷山) Post office was a simple postal branch which handled only postal matters of reception. Following are a few points regarding the office:

Part 1. When postal services restarted in 1895, the name of the postal office was “U-chae-sa (우체사) in Korean. The first two offices were “Han-sung (한성) and “In-cheun (인천). In August, the system of post office branches was started by the establishment of the branch Su-won (수원).

Part 2. The name of “Gwendoline” which appeared on the dater is, no doubt, from the Eun-san (은산) postal reception office, but there were many different views and questions as to why the name Eun-san (은산) had been called “Gwendoline” which was French. Originally, in 1962, Mr. Ki-hong Jin reported that Gwendoline was Eun-san (은산). In the May 1965, issue of “Korean Philately” (house organ of the Korean Stamp Society.

Some articles related about it in Korean are followings:

Through those articles, we know about the “Gwendoline” from the past to the present:

In Korea there was a post office with an English name. It was GWENDOLINE (은산-殷山), the post office in South Pyung-an province.
Early in 1900, in the area of the South Pyung-an province, there were gold mines which had rich mineral deposits. At that time Korea was under the auspices of foreign powers, and the industrial rights of Un-san (운산) and Eun-san (은산) was totally handed over to
the Americans and the English.

About the dater (cancelling stamper), collectors named it the“Gwendoline cancellation” used for postal matters. There were so few post cards and other mail that they have been evaluated as rare philatelic material. The “Gwendoline” issue has been debated yet there is still no clear conclusion. There was an opinion that this name was from the French opera “Gwendoline” by Mr. E. Chabrier. One other opinion was that in the area there were many “Go-in-dol (dolmen), so it had been pronounced as “gwen-do-ri”. But still, how did “gwen-do-ri” become “Gwendoline”? It is this writer’s view that the end sound of “ri” from “gwen-do-ri” should had been euphonized as “lin”. As an example, the male name of “Jack” is changed to the female “Jacklin”.

The 1942 stamp shown above is from France. It was issued in memory of Alexis-Emmanual Chabrier, a French romantic composer and pianist. The stamp shows Mr. Chabrier and his musical piece “Gwendoline”. (Writer: Hae-ryong Yeu, Poet, Columnist)

Part 4. In the period of the Kingdom of Korea, there was a partial portion of a letter which had been sent to London, England, from Korea with a GWENDOLINE cancellation.

The color of the dater for foreign mail was principally black, but this dater had red ink, and, there was no Gwendoline post office. There was no clue about the dater and the color, but there were attempts to locate anything about them, even in a French dictionary. Finally, after a long search to find such dater, it was discovered that the English miners of the Eun-san Mining village of Pyung-an province called their private post office Gwendoline. In the area of Eun-san, there were many “Go-in-dol (dolmen)” and the name of Gwendoline probably came from the “Go-in-dol”
[From: Joong-ang daily newspaper, Philately history 80 years, by Jik-sun Kang; https://news.joins.com/article/1286392]

About 1870, the government of the Empire of Dae-han encouraged the development of gold and silver. A local figure Ki-chang Kim (김기창/金基昌) was mining for a short period, and in 1906 two Englishmen (Mudeuk and Hey) took over and gold mining progressed massively.

[From: The Dictionary of Korea National Culture (Eun-san mine (은산광산/殷山鑛山)]

Why was the dater of the GWENDOLINE (은산/殷山) postal reception office Blue in color? Due to the influence of China, generally the color of the stamp ink pad in Cho-sun was red. But the new postal dater ink color was black. Then, why was only Gwendoline (은산/殷山) Postal Reception Office Blue? There is no official answer for that. So the only way to find the answer was that we would assume it. As we see above, there were a few examples of Gwendoline (은산/殷山) Postal Reception Office: “brilliant golden dater of Gwendoline”. (Jae-sun Hyun, Philately, June 1981, P. 18)

“The color of the dater for foreign mail was principally black, but this was red.”

Mizuhara Meiso, an expert of Korea stamps of 1884-1905, wrote about the Gwendoline post office.

“The office was opened to handle the mail matters of the British mining company office, which contributed 850 won every year as their share in the expenses for the Postal Office. The contribution continued even after the takeover of the Korean Postal Service by the Japanese.”

Postal Matters which have the blue “GWENDOLINE (은산/殷山) dater on them: 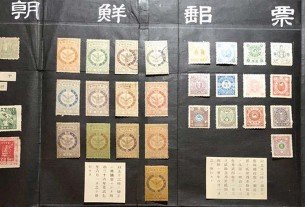 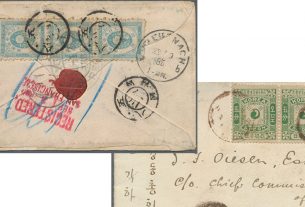