One of our newest Korea Stamp Society members asked the Korea Stamp Society for information on how to tell the differences between South and North Korean stamps. As most of our articles on the KSS website are on specialized topics about Korean philately, we thought it would be good to write an article about identifying Korean stamps. So following are some examples from the first early Korea Empire issues to lastly modern South Korea stamps so collectors can easily tell the difference.

Japan occupied Korean from 1905 until the end of the WWII and in addition to using Japanese stamps during that time for use in Korea, Japan issued “Offices in Korea” overprints on Japanese stamps.

The USA military (“USAMGIK”) overprinted Japanese stamps for use in South Korea during 1946 before later in 1946 issuing the first stamps for South Korea.

South Korea stamps are easily distinguished from North Korean by looking at a few key points.

In summary, the following are key points to identify the different eras of Korea, North Korea and South Korea on their stamps: 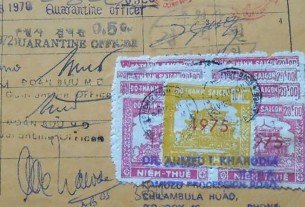 Reader’s Question: What was the use of this quarantine card? 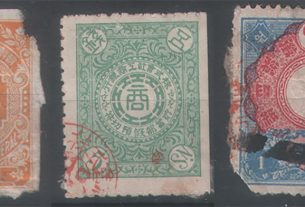 Request for Help in Identification, and Possible Explanations 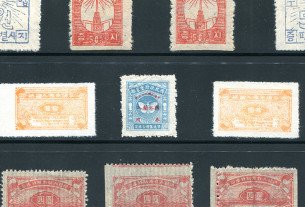 What do we know about these North Korean revenue stamps?