NAME AND PURPOSE
A. The name of this organization shall be the KOREA STAMP SOCIETY. (Hereinafter, referred to as the Society.)

B. The purposes of the Society shall be:

C. The Society is incorporated under the laws of the District of Columbia as a not-for-profit corporation as of August 08, 1968.

II MEMBERSHIP
A. Membership shall be open to all reputable collectors and dealers and other persons interested in the philately of Korea and interested in promoting the purposes of the Society.

B. The classes of membership shall be:

C. Application to, Lapse of, and Expulsion from membership:

D. The annual membership fees shall be determined by the Board of Directors and announced in the February issue of Korean Philately.

III OFFICERS
A. The Officers of the Society shall be President, Vice-President, Secretary-Treasurer, three Directors (at-large) and the Director of Publications. The Officers shall constitute the Board of Directors.

B. Election of Officers:

C. Duties of the Officers shall be:

D. Miscellaneous items related to the officers of the Society include:

IV PUBLICATIONS
A. KOREAN PHILATELY shall be the official publication of the Society under the authority of the Board of Directors and the direct supervision of the Director of Publications.

B. Occasional Publications may be sponsored by the Society and may include

C. Manuscripts submitted for and accepted for publications, together with relative illustrations, shall become the property of the Society, and authors shall receive no remuneration for their articles; original documents will be returned to the owner if so requested.

D. The Director of Publications shall decide what is suitable for publication under the sponsorship of the Society, or in Korean Philately.

V CHAPTERS
A. A Chapter of this Society may be formed by three or more members, at least two of whom are regular members, upon approval by the Board of Directors of the application for the Chapter, provided

B. Each Chapter shall report at least once each year to the Society, listing members and activities of the Chapter; the report shall be published in Korean Philately.

VI AMENDMENTS AND REVISIONS
A. The Board of Directors shall submit to the membership any proposal for amendment or for a revision of these BY-LAWS, which proposal shall have been made by the Board of Directors, a Chapter, or at least five members (other than Honorary Members).

B. For an amendment or revision to be adopted it shall be submitted to the membership, in writing, with a ballot provided by the Society for the purpose of voting on the amendment or revision; which ballot is to be returned by mail to the member of the Board of Directors designated for receiving the ballots. Ballots shall be counted at least six weeks, and not more than three months, following the publication of the proposed amendment or revision, and the results published in the next issue of Korean Philately. Ballots shall be preserved for three months against protest. A two-thirds majority of the ballots voted shall prevail.

VII TERMINATION
The Society may be terminated, and its assets distributed by decision of the Board of Directors, upon petition by not less than five members, excepting Honorary Members, all in good standing, to the entire membership. A two-thirds majority shall be required for termination of this organization, and upon passage of such a motion, the current Board of Directors will undertake those actions they deem necessary to terminate the Society. A final communication to all members shall list the assets distributed. 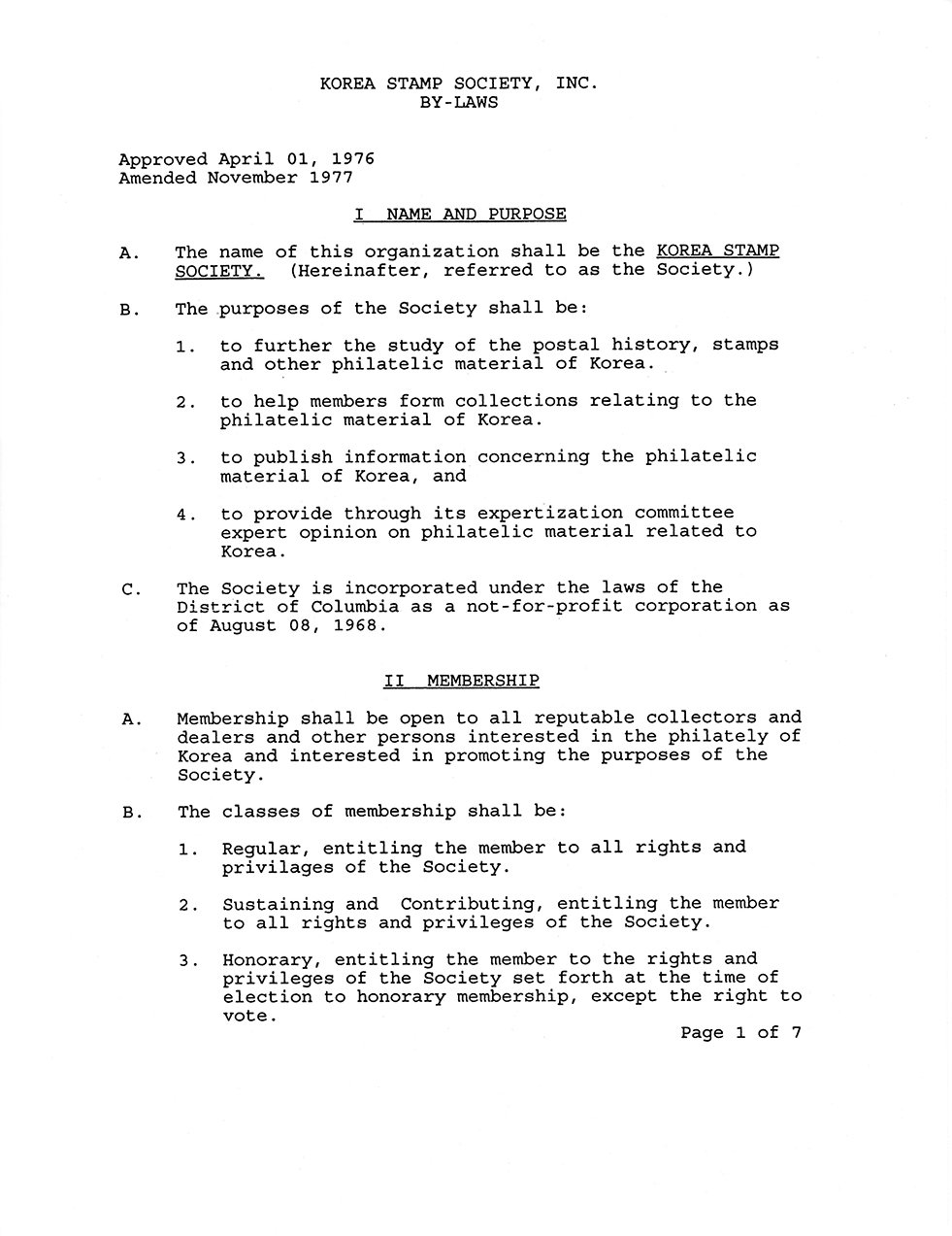 In 2020 the KSS was incorporated again (our previous incorporation was lost), this time in the state of California. With that the KSS is 100% registered according to US law. Here are the relevant details: 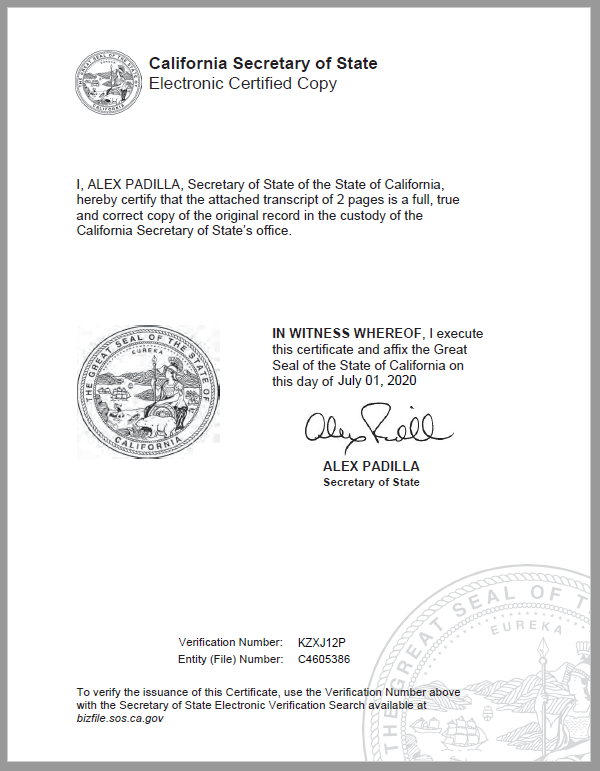 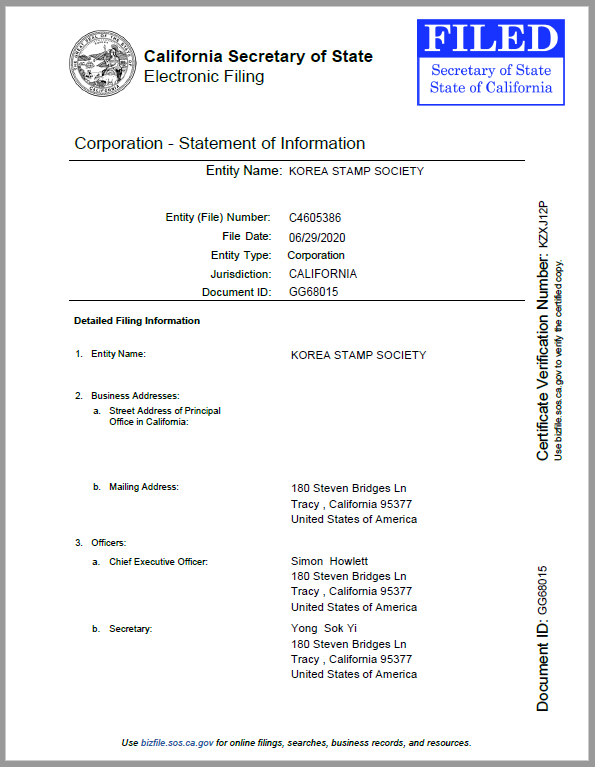 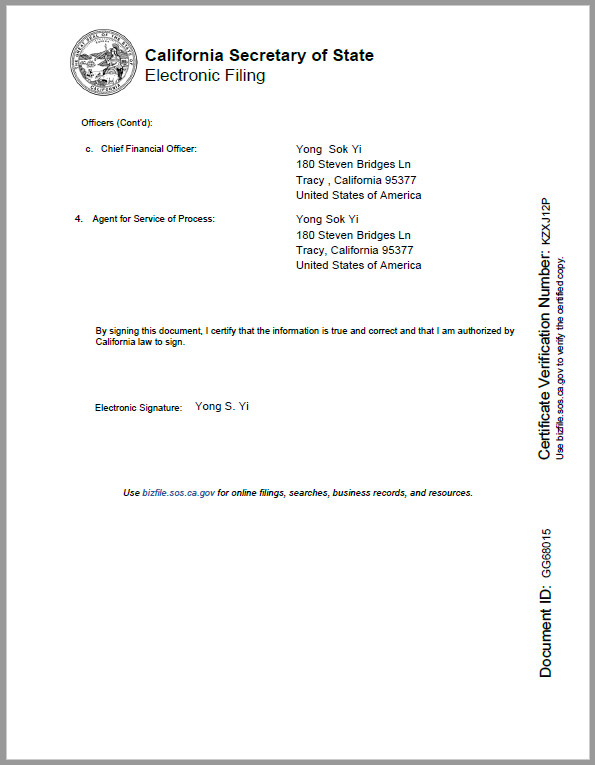