A variation of the old message-in-a-bottle that shipwrecked sailors toss to the outside world is a system devised by two American Merchant Marine Captains for sending passenger and crew mail ashore. “Via Pickle Bottle” is the rubber stamp used by Captain O.H. Martinson, master of the S.S. Mexico, and “Via Sea Jug Post” is the cachet printed on envelopes mailed by Captain C. C. Milbury, “Postmaster” of the M.V. Arizona Sword.

Here’s how letters are mailed: when a ship is passing several miles east of Miami, mail is collected and put into an empty one-gallon pickle jar, or large glass jar. It is ballasted with a handful of cement so that it floats upright. Capped by a water-tight wooden cover with an eighteen-inch flagstaff fastened to it, the jar starts its drift shoreward, flying the flag with the legend “U.S. Mail” printed on it. Inside the jar, along with the letters, the captain places a silver dollar or a few packs of cigarettes for the finder. First class postage stamps are affixed to each envelope.

The rest of this article is for KSS members only. Please login.
1950s and 1960s articles on paquebot covers
In the early years of the KSS several members were active paquebot collectors. In fact, some were not just active as collectors but also as “creators” of paquebot covers. Captains Kirby and Milbury are amongst those people who actively made sure paquebot covers from Korea (with for instance Busan and Incheon cancellations) were created. Their activities and the accompanying covers were then written about by other KSS members. Some of that information is republished here in a short series of articles. This part is a reprint of an article on the activities of Charles Milbury and his Operation Sea Jug, written by Marjorie Dent Candee and published in 1953.
Tagged Paquebot Postal history Sea-Jug Post 선박우편 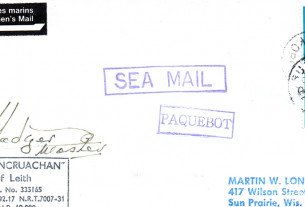 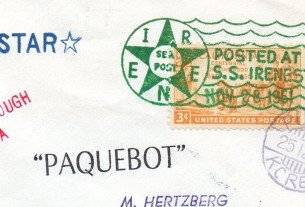 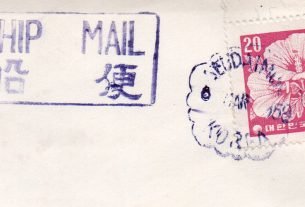 Ship mail versus ship’s mail: not all ships are paquebots!